The new ConScan® system by hpl-Neugnadenfelder Maschinenfabrik visualises the edge contour shape of narrow strips, thus allowing the operator to intervene immediately in the production process in case of minor deviations from the specified contour.

When machining the edges of narrow strips as for example after a slitting process, the shape of the strip edges is an essential part for many applications. On the one hand, no cutting burrs should arise; on the other hand, special applications require the strict observance of specified radii and the position of their vertices.

Experienced operators recognise by the flow of chips generated during the machining process if the edge contour corresponds to the specifications. This, however, includes a very high subjective influence. The machined edge contour can be assessed more objectively if a sample is cut at the end of the coil which is then examined, for example, under a transmitted light microscope. This method is very accurate but has the disadvantage of examining the edge shape only after a complete coil has been machined.

Since the requirements regarding the exact shape of the strip contours has been continually increased, hpl-Neugnadenfelder had been asked by many of its customers to find a solution for a precise online measurement of strip edge contours. This has resulted in the development of ConScan®, a laser-based system for the visualisation of strip edge contours.

It displays in real time the contour of all strip edges graphically on a screen. The system visualises typical defects, as for example burrs, edge chippings as well as radii and edges that are out of alignment. Tests show that even the smallest deviations such as minor edge chippings can be displayed clearly in full detail.

This allows the operator to adjust the chip removal during the running production: the quantity of produced high-quality strips increases, production downtimes are avoided.

The system displays deviations from the specified edge contour of approximately one-hundredth of a millimetre. In a further development stage, the deviations are to be measured and the measured values directly incorporated into the control of the knife positions.

ConScan® is equipped with two laser sensors on each strip side. They project lines on the target edge which are detected by cameras mounted at a tilted angle. Their resolution is a few µm. Based on the course of the projected lines, the strip edge is calculated by the software and displayed on a screen.

hpl-Neugnadenfelder has developed ConScan® for strips having, for example, just been cut in a slitting line and featuring strip widths ranging from 2 to 200 mm and strip thicknesses from 0.3 to 4 mm. Because of being only about 300 mm long in direction of the strip, the system can also be retrofitted into existing edge trimming lines. 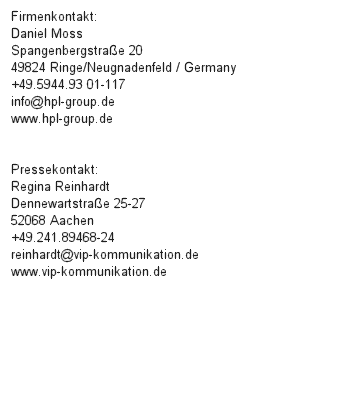